After years of lusting after a Mopho Keyboard I finally managed to bag one on eBay.

It's a great time of year (December) to bag bargins on eBay as normally NAMM is just around the corner in January. Many people are now trying to get rid of gear in preparation for the latest, greatest and new hot toys to be presented at the exhibition.

So, if you have been looking to bag that elusive bit of gear, either due to availability or price NOW is a great time!!

BUT as we all know 2020 has been a strange year indeed. Lots of COVID 19 local and national lockdowns around the world, and here in the UK the finalisation of the deplorable BREXIT (this is when the UK exits from the EU trading block), all adds up to a global worst year on record, in generations. Sorry I digress

Anyway all this to say, I have managed to brick my newly aquired Mohpo Keys :(
How did I mange that you ask?? (...perhaps you did't,.. well I'm going to tell you anyway).


Usually when I aquire a bit of new gear I generally reset it to factory settings, cleaning the gear and setting it up for a fresh start. This time was no exception.
I didn't like the previous users presets, so I backed up the unit incase one day I wish to return to the state I bought it in or if I cockup the purge therefore I have a working state to go back to. In my eagerness to just get on with it, I forgot to check the current OS on the MophoKeys. I should have started by sending the factory presets before sending across the OS SySEx file with latest OS...MISTAKE!!!

The Mophokeys OS file transferred ok, but remained stuck on the "writing" stage, forcing me to restart, turning off/on the MophoKeys. Knowing what the outcome was going to be (because IRTFM *read the f(*@'in manual beforehand), I continued in switching off the power off/on.
...AND VIOLA!! nothing on the MophoKeys screen and all the lights illuminated.


I have my suspicion that it was due to the already installed OS (latest) that prevented itself from being over written. Hence it started the process of wiping the OS, but not finishing/closing the build, therefore freezing on the "writing" stage.

This resulted in me contacting DSI/Sequential Tech Support, and they telling me its likely going to need the PIC OS chip reflashing at the factory, if resending the midi SySEx file again doesn't work. Which I tried to do, but nothing. So I paid the $25 out of warranty fee (which is an amazing deal btw) and ending up having to send the MophoKeys motherboard to a very nice chap named Gus in San Francisco. 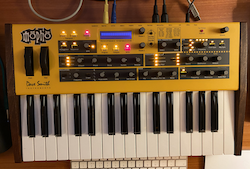 Now this is not an ideal time of the year to be sending parcels, so I had to send via courier, and OMG!!!! How shite were they (DHL)!!, every trick in the book was used by the courier. The typical we called to pick up, but you weren't at home trick, I received notice via email! No card through letter box. Of course they didn't pass! I was waiting all day by the front door waiting for them, PLUS I have a dog that as soon as the is a slight noise by my letter box the dog alarm bark goes off, like its the end of the world and the zombies are trying to break in!!
So, after numerous calls to DHLParcelUK and confirmation by them the driver was nowhere near my address at the time he said he called, followed by assurances the driver would return by the end of the day. But did he turn up ?? Like hell, NO SHOW from DHL!!
UNFUCKING BELIEVABLE!!! What shite customer service!

So I cancelled with the crap DHL ParcelUK courier and went with my usual excellent courier UPS. UPS, that has never ever let me down, reliable and fair prices. Why I even tried to give DHL a chance (again, not first time I have had issues with them) I have no idea?!!?
I guess its prob due to season of goodwill to all men and the fact it has been a shite year, I thought I would try the relationship again, EPIC customer fail!

So, I have lost 3 days window to have a chance at receiving my MophoKeys before Christmas. Now I have no idea when or how long it will be before I receive back my motherboard. I'm hoping not long, as Gus is ready on standby to reflash the PIC chip with the Mopho OS and factory voice and presets.
Fortunately UPS deliver 365 days a year, so there is hope yet!!